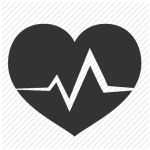 It’s no big secret that many UBC graduates have fallen head over heels for each other during or after their degrees and in our February 2014 E-Newsletter we held a contest and asked you to send in your ‘matches made in medicine’ stories. Read the couples’ stories below. 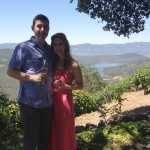 Christine Stables, MD’10 & Cameron Cuningham, MD’12
We met in our last few months of our undergraduate degrees, but our love blossomed through our degrees in medicine at UBC and into our residencies, both at UBC. We went on our first date on Valentines day nine years ago, roller blading around the seawall in the dark with headlamps. I remember us sharing […] Read More >

Keith Neufeld, MD’11 & Anastasia Neufeld, MD’11
It always seems as if a love story can be told very differently, depending on who you speak to, the husband or the wife.  In this case, Keith and Anastasia Neufeld seemed to be on the same page when recalling the details of how they met, minus a few Keith’s memory lapses! According to Keith, […] Read More >

Gareth Eeson, MD’08 & Jenny Dicus, MD’08
On the first day of Medicine 2004 we were seated alphabetically in orientation groups. That’s when I, Jenny Dicus, first met Gareth Eeson.  Luckily the path lab was also arranged alphabetically because in between looking at slides I often caught this sneaky devil making eyes at me.  It took until Spring of first year until […] Read More >

Jeremy Neufeld, MD’11 & Caitlin Naylor, MD’11
We met on the second day of medical school during the orientation week scavenger hunt.  Our eyes locked while passing a lightly salted pretzel from one toothpick to another.  We threw our heads back in laughter as we watched our fellow classmates fall to the ground after spinning deliriously around tennis racquets. The day culminated […] Read More >

Bill Sanders, MD’84 & April Sanders, MD’84
While consuming as many free cookies as possible at student orientation in 1980, Bill Sanders never guessed that he would also be meeting April, his future wife, that day.  By the end of that first day of medical school Bill and April had set their first date which would take place a week later at […] Read More > 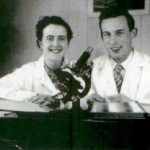 Albert Cox, MD’54 & Margaret Cox, MD’55
Albert (Al) Cox, MD l954, first met Margaret (Peg) Dobson in the microscopic anatomy class. Students were seated alphabetically so the only obstacle keeping Al apart from his future wife was one classmate named Peter Devito. Pete eventually switched seats with Al, as he got tired of being in the crossfire of conversation over his […] Read More > 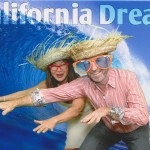 Nicholas Carr, MD’83 & Frances Jang, MD’83
Frances Jang sat at the back of the lecture hall and Nicholas Carr sat at the front—he hadn’t yet realized he needed glasses—so the young medical students didn’t meet until they were paired for a doubles round-robin tennis tournament in third year. Nick’s impaired vision didn’t hinder his tennis or his attraction to Frances. The […] Read More > 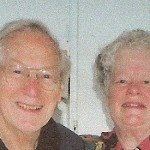 Marion (Cowley), MD’59 & Roger Rogers, MD’59
It was in the early days of Med school and we were all contemplating the fascinating prospect of dissecting our first cadaver. We hadn’t even had our first spot quiz yet when we moved breathlessly from one 60-second ID subject to another. What will happen if this structure is cut? Good heavens! Is it a […] Read More > 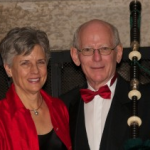 Donald MacRitchie, MD’70, BSc’68 & Elizabeth MacRitchie, BScR’70
After three years of nothing but studying medicine, Donald MacRitchie recognized his future stood to benefit from some social breaks. In September of fourth-year medicine, he went to Queen Elizabeth Theatre to buy a pair of season’s tickets to the popular travelling Broadway shows of the day— and this particular time Auntie Mame was being […] Read More >