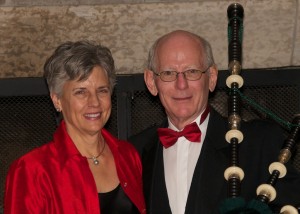 After three years of nothing but studying medicine, Donald MacRitchie recognized his future stood to benefit from some social breaks. In September of fourth-year medicine, he went to Queen Elizabeth Theatre to buy a pair of season’s tickets to the popular travelling Broadway shows of the day— and this particular time Auntie Mame was being performed.

“I had the tickets burning in my pocket – I had to get a date,” says Donald.

So he went to the fall mixer at the post-war hut on the site of today’s William A. Webber Medical Student & Alumni Centre (MSAC), where he danced with a physical therapy student known as Libby Coton.

“I love musical theatre,” says Elizabeth (Libby). “When he invited me out it was just perfect. I couldn’t think of a better date.”

Coincidently, both Donald and Elizabeth were accepted to internships in Montreal starting that summer. Donald proposed to Elizabeth in January, and they were married in Vancouver the following September.

“I knew she was the woman I wished to spend the rest of my life with, so why beat around the bush?” says Donald.

The couple returned to Montreal in the fall, and within weeks of their wedding they lived through the 1970 October Crisis triggered by the FLQ and the invoking of the War Measures Act.

“Life has been smooth ever since,” says Donald.

After five years in Montreal, the MacRitchies returned to British Columbia with the plan to practice for two years in Prince George. They’ve lived there ever since. Both Donald and Elizabeth are actively involved in the expansion of the medical and physical therapy programs in northern BC.  Their three children are UBC alumni, and Donald sits on the Medical Alumni Association (MAA) Board of Directors.

The couple recently applied their medicine and physical therapy skills side-by-side on two hiking trips to Machu Picchu and Mt. Kilimanjaro with groups of young adults with type 1 diabetes.

“These were wonderful adventures,” says Mrs. MacRitchie. “Throughout our lives, we’ve had a lot of fun  together. I think that’s the key to a happy marriage.”