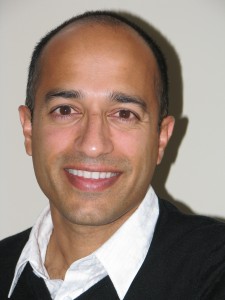 The average time it takes an adult to realize they are experiencing hearing loss to them getting help or assistance is approximately 7 years.  It’s fitting then that it took Terence Miranda, MSc’00, almost that long to come into his true passion as an Audiologist.

Initially trained as an engineer, Miranda wasn’t finding the job satisfaction he was looking for from his first career choice.  To aid him in selecting a new career path, he created a list of 10 things that he wanted from his career.  After reviewing the list with some friends, a colleague of his brother suggested Audiology as it checked all the items on his list.  This seemed like the perfect choice for him as it allowed for the combination of his strong interest in science and his passion and desire to help people.  Terence states that Audiology allows him to “apply science in a humanistic way”.

Early on, it was clear that audiology was an ideal match for Miranda as his thesis topic “Temporally jittered speech produces performance intensity, phonetically balanced rollover in young normal-hearing listeners”, received accolades in the Hearing Journal annual literature review in 2002 as the ‘All-Round Favourite’ article in Diagnostic audiology and ‘Great for Clinicians’ in Hearing science.

After graduation, he was able to combine his new skill set with his background in engineering and began working for Epic Biosonics, a Victoria, BC company that designed cochlear implants and whose technology was eventually purchased by Med-El corporation.

Miranda describes himself as a reluctant entrepreneur.  After working for Vancouver Island Health Authority in pediatric audiology, he realized that he truly enjoyed clinical work but wanted to do it in his own practice.  When his brother, an optometrist with his own private practice, approached him to see if he was interested in partnering with him, Miranda realized this was a great opportunity.

In 2009, Resonance Hearing Clinic opened its first location in Cobble Hill.  They have since expanded to include two other locations in Chemainus and Lake Cowichan.  Each Resonance location is either integrated or located adjacent to a South Cowichan Eyecare Centre; two areas in health which complement each other well.

The only area of BC health care where you must be registered as an Audiologist is pediatrics. In 2005, the province introduced the BC Early Hearing Program which aims to screen all newborns, diagnose hearing loss by age 3 months and have intervention in place by age 6 months. Miranda helped craft the BC EHP diagnostic audiology protocol in 2005 but in 2008, found himself in an unfamiliar place as the parent of a child who did not pass the hearing screening and was diagnosed with hearing loss.  Having a daughter who wears a hearing aid has given him a new perspective on the work that he does and spurs his drive to help the hearing impaired.

Looking forward, Terence is fully committed to strengthening his practice and providing quality service to each and every patient.  He would like to return to applied research again one day, possibly returning to the cochlear implant field.