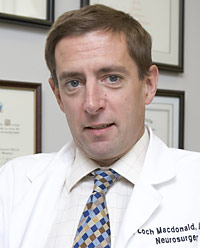 Dr. R. Loch Macdonald is a Professor of Surgery and Member of the Institute of Medical Science at the University of Toronto, Head of Neurosurgery and the Keenan Endowed Chair in Surgery at St. Michael’s Hospital and a Scientist in the Keenan Research Centre of the Li Ka Shing Knowledge Institute of St. Michael’s Hospital. His current research focuses on the prevention of cerebral vasospasm. This breakthrough work shows significant promise for patients who suffer from strokes and other traumatic brain injuries.

Dr. Macdonald is investigating causes of delayed neurological deterioration after subarachnoid hemorrhage using animal models and testing hippocampal electrophysiology and function, animal behaviour, learning and memory, and changes in gene expression and function. He is also studying mechanisms of large artery vasospasm after aneurismal subarachnoid hemorrhage and effects of intracerebral and subdural hemorrhage on the brain. All of this work is laboratory-based and clinical, with clinical trials and patient-based studies conducted testing similar hypotheses.

A member of the editorial board of Neurosurgery, Stroke, Surgical Neurology and Journal of Neurosurgery, Dr. Macdonald is also author of more than 160 scientific publications, 50 book chapters and eight books, including co-author of the authoritative text on cerebral vasospasm, entitled Cerebral Vasospasm.