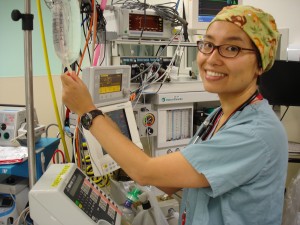 For most, the combination of Shakespeare, engineering and submarines is not the traditional road to medicine, but it was what led Anesthesia Resident and UBC MD graduate Siu-Kae Yeong to a career that she loves. Yeong immigrated to Canada from Malaysia when she was seventeen years old. While completing her BASc in Engineering Physics with Mechanical Engineering and BA in English Literature from UBC in 2004,  she was granted a scholarship with the National Research Council of Canada. This allowed her to do submarine research in Newfoundland, biomedical engineering in Winnipeg and cardiac surgery research in Oxford, England. Working with Oxford University surgeons on new technology that allowed them expediently identify and revise faulty grafts during cardiac surgery, Yeong learned more about medicine and was drawn to it.

For Yeong, medicine was the medium between her two undergraduate degrees. Engineering provided the applied science understanding while English Literature explored humanity. She forged these two interests as she pursued her medical degree, dedicating much of her spare time as a student engaged in global health.

As a student, Yeong was inspired by UBC’s strategic principles on global citizenship to try and improve global health disparities – both overseas and in her own Vancouver community. Her volunteer work included time with Médecins Sans Frontières/Doctors Without Borders in Vancouver, , hospices in the Downtown Eastside, and aboriginal health initiatives in northern BC and global health projects in China, Uganda and India.
Yeong also worked with a team of students and faculty to co-found the Global Health Initiative, which teaches global health skills and social responsibility to UBC students and faculty through workshops, projects and mentorship. The program includes opportunities for students to volunteer overseas as global health workers and help improve the livelihood of citizens in impoverished countries by working in partnership with local communities.

Now a resident, Yeong continues her work in social equality and responsibility, and is working with a team of residents and faculty to improve global health training for physicians through new and existing programs.

Graduating with her MD in 2009, Yeong is in her second year as an anesthesia resident at UBC. She was impressed by many of the physicians she met during UBC medical school. Her experience during UBC anesthesiology rotations helped convince her that the Anesthesiology was for her. As one of the strongest anesthesiology programs in Canada, Yeong believes that UBC was the perfect school for her to complete her residency.

Yeong is drawn to the challenge of anesthesia. While many see anesthesia as a field distanced from the patient, she sees it the exact opposite.

“Going into surgery can be very stressful experience for the patient. Anesthesiologists have to connect with a patient and establish a good working relationship in a very short amount of time.”
Yeong continues to use her two undergraduate degrees as she forges her way into her career as an anesthesiologist. The problem-solving skills and iterative design that she learned as engineer guides her through the technical aspect of her job, while the study of character and motivation in literature has helped her in interacting with patients and understanding their perspectives better.
While Yeong doesn’t feel like she has an established career yet, she is doing what she loves. She is most proud of the Global Health Initiative and the work that it has done. While there may always be health disparities throughout global communities, doctors like Yeong help to shorten the gap that separates us all. Yeong feels as though she learns something from everyone she meets, but judging from all she has done in her life thus far, it is clear that the people she meets also have a lot to learn from her.