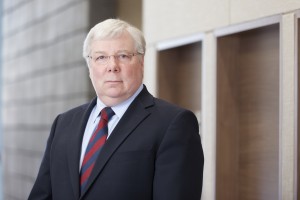 Christopher Beauchamp was in his orthopaedics residency at UBC Faculty of Medicine in 1980 when Terry Fox, whose right leg was amputated after he was diagnosed with osteogenic sarcoma, was forced to end his run across Canada because the cancer had appeared in his lungs. Inspired by Fox’s story, Beauchamp and three colleagues across Canada interested in the emerging field of orthopaedic oncology formed a group to discuss cases.

Three decades later, Beauchamp has helped to train hundreds of medical students and orthopaedics residents at UBC, and helped to build the Department of Orthopaedics at the Mayo Clinic in Scottsdale, Arizona. In his clinical practice, he has treated thousands of patients and is always touched by their courage, gratitude and optimism. A smile lit up his face as he recalled a nine-year-old cancer patient who recovered from an amputation, survived numerous surgeries and is now leaving home at age 19 to spend a year in France.

“Patient care is the most rewarding aspect of my work,” Beauchamp says. “But I also believe it’s every doctor’s duty and responsibility to teach medicine to the next generation.”

Beauchamp was born in Nelson, BC, where his father settled to practice family medicine and surgery after serving in the Second World War. Young Christopher always wanted to become a doctor, and from his first year of medical school at UBC, he knew he wanted to specialize in orthopaedics. He didn’t tell anyone, though, because he didn’t want to be seen as following his older brother, Richard Beauchamp, MD’71, now a Clinical Professor in the Department of Orthopaedics based at BC Children’s Hospital.

After completing his residency in orthopaedics from 1980 to 1984, Christopher continued his UBC training with a fellowship in oncology, which opened the door to an exciting opportunity at the Mayo Clinic—a Special Fellowship in Musculoskeletal Oncology and Adult Reconstruction. He left for Rochester, Minnesota in 1985, and also completed a second fellowship in clinical and research oncology at the University of Florida, Gainesville that same year.

Beauchamp returned to UBC in 1986 to begin his medical practice at BC Children’s Hospital, the BC Cancer Agency and the Vancouver General Hospital (VGH). He consulted for the Arthritis Society and Centre and assumed leadership positions at VGH with the Bone Bank and the Section of Musculoskeletal Oncology. He also began to teach orthopaedics at UBC, first as a Clinical Instructor and later as a Clinical Assistant Professor and Clinical Associate Professor.

“When I was a medical student, I was oblivious to the fact that my clinical teachers were largely volunteering,” Beauchamp says. “I’m thankful every day for the teachers who were so patient and taught me my skills. Teaching surgery is very stressful.”

The teachers at UBC who influenced Beauchamp the most were Drs. David Hardwick, Chuck Slonecker and David Harder. Dr. Harder introduced him to Zen and the Art of Motorcycle Maintenance, a philosophical novel that explores the meaning of quality that Beauchamp believes should be required reading for all orthopaedic surgeons. He credits Dr. Harder with “teaching me how to think.” He is also thankful to all of his mentors, teachers and ultimately colleagues at Vancouver General Hospital especially Dr. Robert McGraw.

It was the culmination of these experiences that led to Beauchamp’s recruitment in 1994 to help build the Department of Orthopaedics at the Mayo Clinic in Scottsdale, Arizona, where he was Head of the Department of Orthopaedics for 10 years. Now an Associate Professor, he continues to specialize in musculoskeletal oncology, adult reconstructive orthopaedics, and bone and soft tissue sarcomas. He is investigating new advances in joint replacement for patients with massive bone loss, tumours and infected, failed joint arthroplasty, including in-house product development using metal.