It’s hard to find a family with more UBC degrees then the Iwama’s.  Brothers George, Tom and Michael have seven UBC degrees between them, and when you add in their children and spouses, the total increases to 12!  They all started their post-secondary education at UBC and have all circled back to the University at some point over their careers. 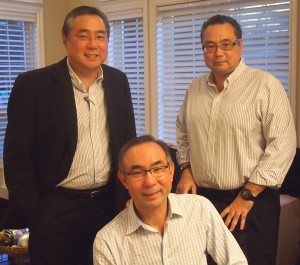 The Iwama family immigrated to Vancouver from Japan when the boys were teenagers.  They always felt an unspoken expectation from their parents that they were to do great things.  Each brother is quite accomplished on his own terms.  George (BSc’75, MSc’77, PhD’86 ) stepped down as the President of UNBC  in late 2013 and has now taken on a new role as Executive Vice President at the Okinawa Institute of Science and Technology Graduate University (OIST) in Japan.  Tom (BSc’78, MD’82) has a successful medical practice in Surrey, specializing in Palliative Care, and Michael (BScRehab’87, MSc’98) has carved his niche in Occupational Therapy, currently Department Chair and Professor at Georgia Regents University.

George’s career has been split between being a University Professor for 15 years and a Post-Secondary Administrator for 14 years.  He sees the benefits both positions have offered him.  Through his posts as a Professor he was able to pursue his interests and travel the world, essentially choosing which questions he wished to research and answer.  He feels incredibly privileged to have been able to do that for so many years.  The second half of his career has been focused on Administration, an equally rewarding area, where he can enable faculty and students to pursue their interests and achieve their goals.  As he states, “The institution’s success is always grounded in the success of the students and faculty”.

But don’t ask George for advice on how to achieve such levels of success in the post-secondary education arena.  “[He has] no idea how to become a Dean or President”.  His advice is to “do what you love and train yourself to have the courage to take the next step”.  He encourages others to trust themselves to know what feels right for them.  “Everything in life is preparing you for the next step.”

Tom initially followed his older brother’s footsteps, going to UBC to earn a Bachelor Degree in Science in Zoology.  He later went on to get his Medical Degree at UBC and has been a Family Physician in Surrey for 30 plus years.  The last 15 years he has also worked as a Palliative Care Consultant.   Tom describes his work as “very humbling when dying patients invite him into their journey before death.  It is incredibly rewarding when I am able to ease their pain and suffering”.   He also enjoys teaching the next generation of physicians as a clinical instructor for UBC.  “It is a privilege to impart wisdom that comes with experience onto students. A lot of what you learn in medicine comes after medical school.”

Michael has worked and travelled around the world as an Occupational Therapist and is a highly regarded scholar & teacher in his field.  He developed the Kawa Model, which has been incorporated into occupational therapy curricula and clinical settings worldwide.  His path to this profession wasn’t a direct route though.  Initially enrolled in the Faculty of Education, Michael failed his midterms and decided he needed to re-evaluate what he wanted to do.  His brother, who has working in Victoria at the time, invited him out to spend some time with him and from here his path started to become clearer.  After receiving his degree in Kinesiology at the University of Victoria, he applied to the Bachelors of Science in Rehabilitation Medicine at UBC, which at the time was a joint program with Physiotherapy (PT) and Occupational Therapy (OT).  He first pursued PT but opted for a seat in the OT program. It wasn’t until he was in the program that he realized, from the very beginning, that’s where he should have been.  Michael found that he wasn’t interested in working with athletes and people who were generally healthy and helping to bring them to a high functioning level in their chosen sport or interest area.  He wanted to work with ordinary people who were facing challenges in their lives, to bring them up to a base level so that they may enjoy a basic or average level of health & enjoyment of life.   His passion lies in enabling ordinary people to do extraordinary things.

All three credit the caliber of leadership, teaching and learning at UBC as critical steps to helping them establish themselves professionally in each of their fields.  When asked, they each easily list off several mentors at UBC who were key to their success, specifically, Peter Larkin, David Randall, Chuck Slonecker, Susan Stanton & Lyn Jongbloed

Throughout their careers they have all circled back to UBC at some point.  George has returned several times for further education and was a professor at UBC for 15 years.  He has recently circled back to UBC as an Affiliate Professor in Zology. Tom has served as a clinical instructor for UBC for several years, and Michael returned to complete his graduate degree and has held academic appointments as lecturer and clinical instructor at UBC as well.

Tom recalls going to Ottawa for an internship after graduating from medical school.  He initially wondered how he would compare to the other new residents and if the education he received at UBC would serve him well enough.  After several weeks he came to realize that he did in fact receive excellent training and felt very well prepared and well positioned for his internship and his career that lay ahead.

When asked what they are looking to achieve in the future, all three brothers answered humbly that they have already achieved success within their careers but more importantly with their families.  Doing what they love, surrounded by those they love, is the biggest success one could ask for in life.

They all echo their brother Michael’s sentiments when he states that their parents “always implied they were meant to do great things.  They helped us develop skills and talents and bring them to fruition.  It is rewarding for us to now be able to do that for others; it is a wonderful state of being”.