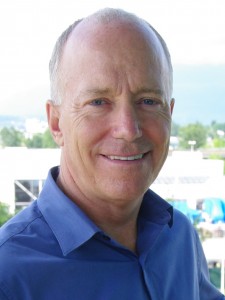 Hal Gunn, BSc’77, MD’81 always had an interest in health and well-being, but hadn’t considered a career in medicine until the third year of his Honours Zoology degree. He started thinking about his future career and his interest in health and, a week before the deadline, applied to medical school at UBC. He was one of the lucky 80 students admitted that year!

Gunn had imagined, perhaps naively, that an important component of medical school would be about learning to be happy, healthy and well. He learned a lot of fascinating things about the treatment of illness, but very little about health, happiness and wellbeing. During his second year, Gunn decided to take a year off of medical school and travel, and reconnect with his sense of health and well-being. That pivotal year helped him refocus on what was important to him – health and happiness. He returned to UBC to complete his MD education, followed by residency in South Africa. After residency he found himself back in BC, working as a family physician for Tumbler Ridge for the next 5 years.

Gunn chose medicine as his career path due to his interest in health and healing, and he couldn’t shake the feeling that he wasn’t accomplishing what had inspired him to become a physician. After a few locums in northern BC, Gunn became the first physician in Tumbler Ridge, a coal mining town created in the middle of the wilderness, where he practiced family medicine for 5 years, enjoying the challenge of small town medicine. He then moved back to Vancouver to work at UBC Student Health Services part time while fulfilling his interest in learning about the humanities. He took courses at UBC in philosophy, linguistics, women’s studies, sociology, religious studies, psychology and anthropology.

Through the combination of his formal training, practical experience and personal interest in the humanities, well-being and happiness, Gunn decided to shift his practice of medicine to focus on health and healing and the transformative potential of illness in enabling people to find balance and well-being in their lives.

Fulfilling his desire to be involved in the leading edge of what medicine might look like, Gunn co-founded InspireHealth in 1997. InspireHealth are Canada’s leading supportive cancer care centres, with locations in Vancouver, Victoria & Kelowna. The goal of InspireHealth’s programs is to incorporate the support of health (nutrition, exercise and emotional and spiritual support) in the care of people living with cancer and their family members. A team of physicians, nutritionists, clinical counsellors and exercise therapists provide guidance on healthy diet changes, stress reduction and emotional counseling, decision making, exercise, immune system support and personal coaching.

InspireHealth is currently involved in educating and mentoring medical students and residents and Gunn is a Clinical Assistant Professor at UBC. Through this work, he pleased to see that UBC’s medical school is increasingly recognizing the human side of medicine and the role of patient empowerment, an excellent complement, in his opinion, to the important technical skills one learns in medical school.

In addition to InspireHealth, Gunn is also founder and CEO of Qu Biologics, a Vancouver based biotech company which is developing immunotherapies with the goal of re-establish health by restoring the body’s normal immune function and innate capacity to heal. Qu Biologics’ Site Specific Immunomodulators (SSIs) are designed to recruit activated innate immune cells to the targeted organ or tissue to restore immune function, to treat a wide range of chronic diseases, including cancer and inflammatory bowel disease.

Thinking back to his time at UBC, Gunn remembers many classmates and faculty members fondly for their support and mentorship he received throughout the years. He is particularly grateful to Dean Webber who approved his request for taking a year off to reconnect to this health and well-being. That year was instrumental in shaping the direction Gunn would take his career.

Looking forward, Gunn envisions InspireHealth as a training centre for medicine based on patient empowerment and engagement, and in so doing, to contribute to shaping the future of medicine. He is hopeful that Qu Biologics’ Site Specific Immunodulators may contribute to the well-being of people with cancer and other immune related diseases. And he is hopeful that, one day, learning to be healthy, happy and well will become an important component of medical school experience.

For more information about Qu Biologics or InspireHealth please visit: