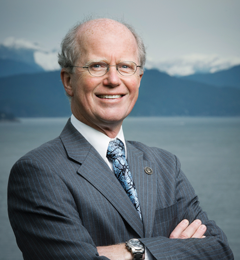 Dr. Gavin Stuart has been Dean of the Faculty of Medicine at the University of British Columbia since September 2003. Upon his renewal in September 2009, he also was appointed as UBC’s Vice Provost Health, which involves representing the University in health-related interactions with other universities and health authorities. He is past Chair of the Board of the Association of Faculties of Medicine of Canada, and was made an Honorary Alumnus of UBC Faculty of Medicine in 2009.

A native of Manitoba, he attended the University of Western Ontario for his undergraduate medical and postgraduate training in obstetrics and gynecology. He pursued a fellowship in Gynecologic Oncology at Wayne State University in Detroit, where he stayed on as a faculty member. He then moved to the Tom Baker Cancer Centre in Calgary, where he was the first Director of Gynecology. After a period as Head of the Department of Obstetrics and Gynecology at the University of Calgary, he was appointed as Professor and Head, Department of Oncology and Director of the Tom Baker Cancer Centre. In 1999, he was appointed as Vice-President of the Alberta Cancer Board.

In addition to carrying out his duties as Vice Provost and Dean, Dr. Stuart continues to be an active teacher, clinician and researcher. His clinical research and publications have been in the area of gynecologic cancer, including population-based screening programs and the conduct of clinical trials as therapeutic interventions in gynecologic cancer.

His clinical activity is as a member of the outstanding gynecologic oncology team based at Vancouver General Hospital and the BC Cancer Agency. He is the principal investigator of many large phase III clinical trials. Dr. Stuart has held multiple leadership positions in the field: past Chair of the Gynecologic Cancer Intergroup, leading international trials with several national cooperative groups; Co-Chair of the Gynecology Site Committee of the NCI Canada; and past President of the Society of Gynecologic Oncology/La Societe de Gyneco-Oncologie du Canada (GOC). In 2009, Dr. Stuart received the Presidential Medal Award from the GOC. He is a fellow of the Canadian Academy of Health Sciences.