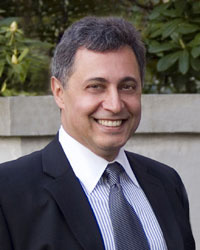 Having the perfect work-life balance is not easy for most, especially if you’re Bas Masri, MD ‘88.  With over 100 peer-reviewed articles published and having achieved academic rank of full professor at the University of British Columbia by his early 40’s, it’s easy to see that Masri has had a very busy career so far.  Now, as the Head of the Department of Orthopaedics at UBC and Vancouver Acute Hospitals, Masri continues to add impressive accomplishments to his resume while trying to balance a healthy lifestyle with his wife and two beautiful children.

Becoming a doctor was decision made early for Bas Masri.  His curious mind got the best of him and from a young age he was fascinated by medicine and was always asking questions.  Masri started his medical training prior to graduating with a Chemistry degree (BSc ’85), allowing him to complete his medical degree a year early in 1988.  Throughout his medical education, Masri often believed he would specialize in internal medicine given that it was intellectually challenging to him, but he soon learned that other areas were equally stimulating.  He eventually pursued orthopaedics after working with then resident, Dr. Marcel Dvorak, whose enthusiasm and skill greatly impressed Masri.  Today, Masri focuses on hip and knee replacement in his clinical work and has started performing patello-femoral replacement surgical procedures, as an alternative to total knee replacement, which will dramatically ease the pain for patients with patello-femoral arthritis while still allowing maximum mobility and range of movement.

While a student, Masri had another strong influence in Dr. Bill Ovalle. Ovalle instilled in Masri an appreciation for research. The synergies of combining clinical treatment and research in his practice have undoubted benefits. Masri is currently focusing his research interest on clinical outcome of joint replacement as well as on alternate bearing surfaces to resist wear better and last longer than polyethylene.

As a professor, Masri has the opportunity to see firsthand that the student perspective of medicine hasn’t changed much from when he was a student.  For Masri, he was relatively young to be starting medical school at the age of 19.  “As a student you have a different perspective of medicine, a perspective that is often idealistic rather than realistic” remembered Masri.  Now when he teaches, he focuses on realistic teaching practices and tries to show medical students and residents the struggles that doctors face such as limited resources, politics, human resources, and the wait lists and how to overcome these obstacles, while still highlighting the rewards of this wonderful profession.  Giving his students a better understanding of the ‘real medical world’ will help them when it comes to running their own practices, and as long as they continue to learn how to keep learning, Masri knows the next generation of doctors will do amazing things.

Masri believes he is privileged to have a stable and rewarding job.  From being a child and wanting to know more behind medicine to being a doctor who is able to restore peoples’ lives, Masri knows why he is so passionate about his career.  He believes that he has to continually prove his value to society because that is who he serves.

With all that he does, Masri’s greatest challenge is to ensure that he maintains a proper work-life balance, which continues to be a challenge. While ideally he would like to organize his time so that he can drive his children to school at least once a week; this does not happen as often as he would like. He does his paperwork after his children have gone to sleep, and even tries to play tennis once a week.  As a mentor to his 12 year old son, who happens to want to be an orthopaedic surgeon, Masri is trying to teach him the importance of hard work, inquisitiveness and keeping an open mind.  After all, that is how Bas Masri is where he is today.