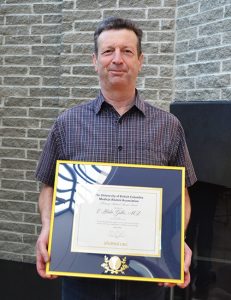 Dr. Gilks leads a research program focused on gynecological cancers and is co-founder of OvCaRe, a multidisciplinary team studying ovarian cancer. He is also co-founder and co-director of the Canadian Immunohistochemistry Quality Control program, which provides proficiency testing for Canadian diagnostic immunohistochemistry laboratories. Dr. Gilks is past-president of the International Society of Gynecological Pathology. He has received awards for both his teaching and research, and has been an author on more than 400 peer-reviewed research publications. He is recognized internationally for his work on improving diagnosis of gynecological cancers, and has been a contributor to the major pathology reference textbooks, including the last three editions of the WHO Classification of Tumours of the Female Reproductive Tract. He has in the past been medical director of laboratories and department head for the Deptartment of Pathology and Laboratory Medicine at Vancouver Coastal Health.