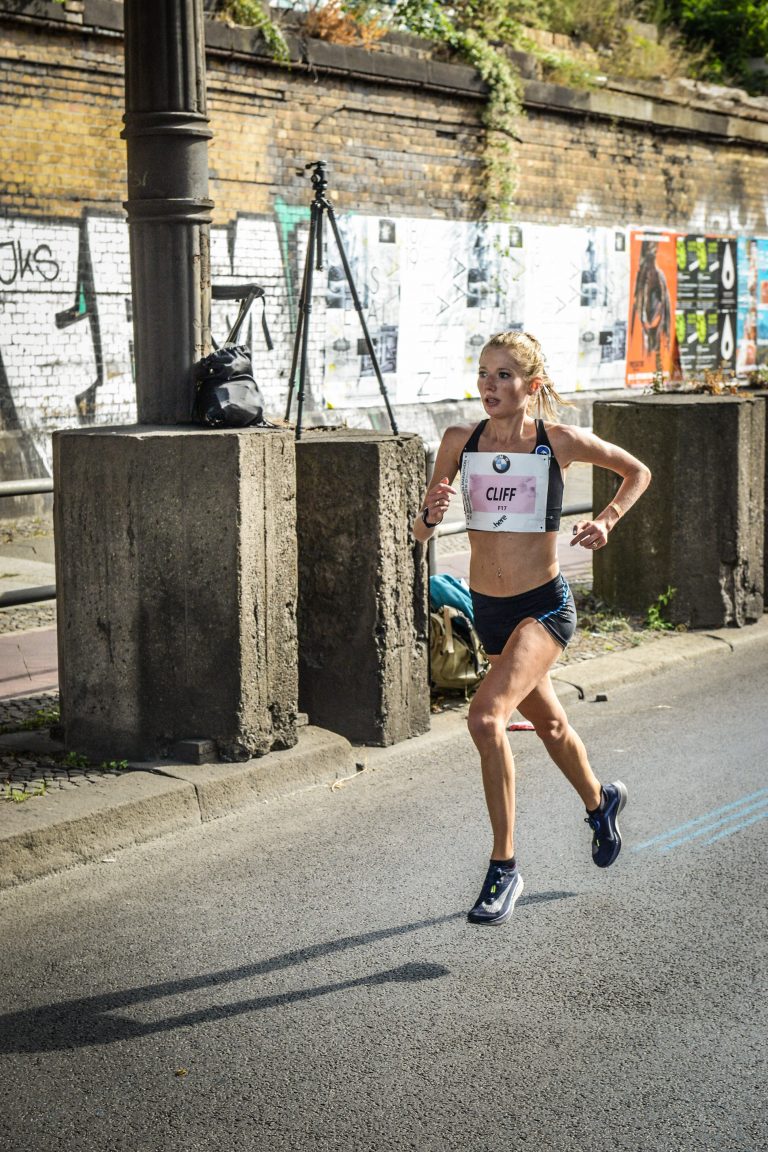 Rachel Cliff, MSc’16, is an elite long-distance runner, specializing in the 10,000 metres, half marathon, and marathon. She is currently focusing on qualifying for the Tokyo 2020 Summer Olympics.

Rachel enrolled in a toxicology elective in her second year of undergraduate study at the University of Guelph and was fascinated by the field, particularly the regulatory and human/public health aspect of it. The following semester, she switched her major from a B.Sc. in General Biology to one in Biomedical Toxicology.

She learned about the Masters in Occupational and Environmental Hygiene (OEH) program in the School of Population and Public Health at UBC during the final year of her undergraduate degree when she watched a seminar presentation by Dr. Paul Demers, one of the school’s founders. Rachel saw the OEH program as a way for her to expand the knowledge she gained in her undergraduate degree, with the general goal of improving public and occupational health by minimizing environmental exposures and striving to make workplaces safer.

After completing her Masters OEH program in 2016, Rachel worked for a year and a half as a research assistant at the Partnership for Work Health and Safety at UBC, before fully committing herself to long-distance running. Making that decision felt like a risk for Rachel. However, she knows there is a finite window in which to be at her athletic peak and she intends to make the most of it. In 2016, she narrowly missed qualifying for the 2016 Summer Olympic Games and described it as “heartbreaking.” After that experience, Rachel knew that she wanted to take her athletics to a professional level for a full Olympic cycle so she could put herself in the best possible position for the 2020 Summer Olympics in Tokyo.

During an average week Rachel runs between 70 and 90 miles – 2 to 3 of the runs are event-specific interval based workouts, and her additional training includes cross training and weight lifting at least twice a week, along with daily exercises that are assigned by her physiotherapist. While most of her runs are done in solitude along the Vancouver trails, she says distance running is anything but a solo sport. “Working closely with an expert, professional coach who acts as both a boss and a mentor, and training with a great group of teammates, who are both friends and competitors,” she says highlights the teamwork that goes into the sport. “I seek advice from physio and massage therapists, sports psychologists, human physiologists and sports medicine doctors. Vancouver is also a very active community with lots of available running routes, and I think because of that, there’s a very supportive running community here, which is fun to be a part of. The people I meet through the sport are one of my favourite parts of what I do.”

While acknowledging the challenging and constant state of fatigue training can bring, she describes that the best aspect of her athletic career has always been and continues to be the process. “Pushing your body to its limits is both an art and a science,” Rachel says. “In athletics, there are always new boundaries to push and ways to improve yourself. As a scientist, I like to think of it as ‘the ultimate science experiment’, albeit one where me, the athlete, is the research subject in a study with a sample size of one.” Approaching her training and racing with this in mind, she understands that every injury is an opportunity for her to learn about human anatomy, every poor workout or race is a chance to learn about human physiology or psychology and address a weakness, and every long run is an opportunity to understand about nutrition and proper fueling.

Rachel travels frequently internationally, often as an unattached athlete, but at times representing Canada on numerous occasions. “There are few things as special as putting on your nation’s singlet and walking to the start line to compete at the world stage,” she says, “Especially when you know you are in peak physical fitness. Every year my goals seem to get bigger and I know I likely won’t achieve them all, but I love the feeling of accomplishment when a new one is reached.”

An item on her bucket list is to visit every continent in the world, with just Antarctica left on her list. Citing the difficulty in running there, Rachel says she will likely complete that goal after her running career. With her determination and grit, it will be exciting to see what is in store for her next career.