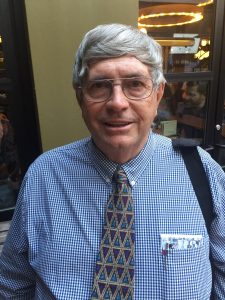 Dr. James Watt graduated from UBC Medical School in 1967 and moved to Rhodesia Zimbabwe, with his wife Bette (BEd’65, MEd’69) in 1970 to take up the post of Chief Medical Officer for Howard Hospital. He remained in Rhodesia until 1984 and returned in 1994 before finally retiring in 1999.

Howard Hospital, a 167 bed general hospital, included medicine, pediatrics, obstetrics, psychiatry, infectious diseases, nurse’s training and community health. In his own words, “due to the 7-year-long War of Independence, I was the only doctor [there] for half this time, starting mobile clinics on land-mined roads to serve the “protected villages” (concentration camps). With our excellent staff, we organized the first mass polio, diphtheria, tetanus and measles campaigns, helping to wipe out these diseases. [We] opposed torture and treated both sides in the conflict, resulting in threats of detention, expulsion and death.”

During his years at Howard Hospital he “helped turn Howard from a few ramshackle buildings into today’s modern health centre that provides affordable care for 270,000 people. Having had a front row seat to the country’s brutal civil war throughout the 1970s, [Dr.] Watt survived multiple assassination attempts along with the largest anthrax outbreak in human history as he and a handful of international doctors grew the hospital on a shoestring budget.” [1]

In 1979, death threats caused him to withdraw from the Howard Hospital; however, he remained in Rhodesia, soon to become Zimbabwe. During this time he worked for the Ministry of Health designing and building teaching aids for rural health workers, treating victims of chemical and biological warfare agents and the plague, and also as a lectured at the University of Zimbabwe Community Medicine based at the Julius Robinson Center.

He returned to Canada in 1984 due to fatigue and polyneuropathy, likely caused by exposure to chemical warfare agents. In Calgary, he worked for the Salvation Army Children’s Village and in 1989 Dr. Watt established the Calgary Urban Project Society (CUPS) street clinic. In 1995, he returned to the Howard Hospital where, in his own words, “he started four groups of AIDS-education workers in three languages, using puppets, demonstrations, song and story to educate and empower the youth, especially girls, in the prevention of AIDS.” In 1999, he passed the title of Chief Medical Officer to Dr. Paul Thistle and retired a year later.

In addition to his inspiring work as a physician, Dr. Watt is credited as the inventor of the tippy tap. “Tippy-Tap is a low cost, low water, low tech device to wash your hands in areas where there is no running water … [Dr. Watt] came up with a novel idea of converting the common gourd or calabash into a hand-washing device, which came to be known as ‘Mukombe’.” [2] To learn more about the Tippy-Tap visit http://www.tippytap.org/.