Back to Alumni News

The show must go online: Medical student traditions transformed for a virtual audience

With the COVID-19 pandemic limiting activities at indoor venues like movie theatres and concert halls, arts and culture event organizers have found new ways to forge onwards. And for the producers of events that are near and dear to the hearts of UBC medical students, the task of continuing traditions has never been more important.

UBC MedPlay and UBC Medicine Spring Gala are annual productions with over 40 years of history between them and have involved thousands of medical students as volunteer cast members, performers, stage crew, producers, and supporters. Every year, medical community members, including professors, preceptors, faculty, and staff, converge at the Chan Centre for Performing Arts and the Medical Student & Alumni Centre (MSAC) Vancouver to enjoy the creative and artistic talent.

Despite the differences in these events – one a stage play and the other an evening of artistic and musical performances – in 2021, their fates were the same: online was in their destiny. In March 2020 and months before their scheduled show dates, everything came to a halt in British Columbia, and much of the world. Despite the pandemic hampering their plans for in-person shows, the student producers’ passion and dedication to their fellow students inspired them to persevere through any and all obstacles. 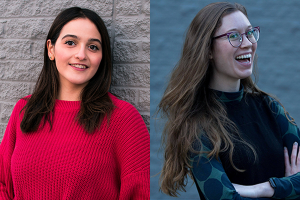 Emma Finlayson-Trick (she/her), a third-year student and one of the producers for the UBC MedPlay 2021, wanted to be involved even before she started school at UBC. Throughout her elementary and high school years, she performed improv and theatre, and wanted to get back to her performing roots at UBC’s medical school. “Joining MedPlay was the highlight of my first year,” Emma says. “It’s a huge time commitment, but it’s so worth it.”

After a first table read in October, students usually gather three times a week for 10 hours of rehearsals every week, with the rehearsals increasing in frequency and length towards showtime. Outside of rehearsals, students also need to spend hours of personal time remembering lines and commuting to the MSAC for rehearsals, therefore mostly first- and second-year students in pre-clerkship can participate due to the demands on their time.

Back in summer 2020, when the MedPlay team were cautiously optimistic for an in-person production, they chose Art by playwright Yasmina Reza because the cast of 3 students could still safely practice while adhering to physical distancing requirements. But as the pandemic continued, organizers had to rethink their event. For Shadan Ashrafi (she/her), also a third-year student and one of the producers for the 2021 MedPlay, cancelling never crossed her mind because of the event’s structure.

“Cast members of the previous show would typically become the producers the next year,” Shadan says. “If MedPlay didn’t happen, then there would be no continuity, and MedPlay would disappear.”

“We also wanted to make sure the incoming class had an opportunity to bond together through this collective experience,” Emma shares. “I was a cast member in my first year, and it really gave me an identity in the medical community, and I made incredible friends.”

“When social interaction was such a luxury, it was important for MedPlay to continue,” Shadan adds.

Through a suggestion from Shadan’s roommate, UBC MedPlay became a radio play for the first time, which gave the organizers and cast members a bit more freedom to stretch their talents. Emma and Shadan increased the number of students who could participate by having two cast versions, including a gender-swapped cast. As rehearsals were now completely online and without the commute time to the MSAC Vancouver, the show included students from outside of Vancouver, a first for the typically Vancouver-based production.

There were some challenges to putting on a radio play: cast members had to learn how to act with their voices, a narrator was recruited to add exposition for listeners, and producers had to learn how to send sound equipment to students to record their performances remotely. In the end, two performances were held in February and March 2021. People from around the world tuned in, the cast organized listening cast parties, and the event was a resounding success and exceeded their fundraising goal for a local charity. 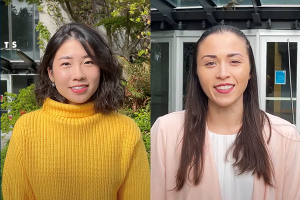 Celebrating the arts and creative self-expression

As a trained visual artist, Dr. Nancy Duan, MD’21 (she/her), was eager to get back into the arts once she started at UBC. Her involvement with the UBC Medicine Spring Gala began as a publicity director in her second year in medical school before becoming an artistic director for the 2020 show that took place before a 1000-person audience at the Chan Centre for Performing Arts a week before the March 2020 lockdown in B.C. Along with Dr. Nazde Edeer, BSc’17, MD’21 (she/her), as co-producers of the 2021 show, they were eager to plan the 2021 edition with some unease about how the pandemic would affect the show and the student performers.

Like MedPlay, the Spring Gala takes months to prepare and Dr. Duan and Dr. Edeer started the planning process early in summer 2020. By August, they realized that an in-person event would not be possible, but Spring Gala was too important to cancel.

“Spring Gala promotes student self-expression and creativity, and gives students the platform and support to do so, Nancy says. “It is also a chance for the medical community to gather and celebrate the arts for one special night in an actual theatre.”

“Performers know how big the production time is for this incredible show and there’s this sense of pride you don’t witness anywhere else,” Dr. Edeer adds.

Even though in-person events were unlikely to be allowed for their show, the producers pivoted to recording all the performances at the Chan Centre and planned to broadcast online. But in February 2021, restrictions increased and the producers had to tell the performers that they could not use the Chan Centre and had to find alternative ways to film their performances.

“It was definitely more stressful for the performers to deal with the constant changes and I’m really inspired by their adaptability and resilience.” Dr. Duan says. “Without the professional equipment at the Chan Centre, students used their phones to record, most of the time in their own homes, and that’s a lot different than performing in front of an audience.

“It was a lot to ask of them, but they were so committed and delivered amazing performances.”

This pivot also allowed students from all the distributed sites in Kelowna, Prince George, and Victoria to participate, which was previously not possible as there were limited funds for students to travel to Vancouver to perform. Once all the bhangra dances, acapella performances, martial arts, musical parodies, and piano medleys performances were received, the producers hired an external video editor to combine all the videos into a 1.5-hour performance for online viewing.

On May 15th, 2021, the medical community came together from the comfort of their homes, wherever they were, to view over a dozen student performances and the positive feedback from faculty, mentors, and students was “effusive.”

“We received emails from alumni and people from across B.C. who would have normally not able to come to see the show, so that was a definite benefit of going online,” Dr. Edeer says.

The pandemic continues, but traditions do too

Though B.C. is now in the midst of the Omicron wave, medical students are still adamant about continuing these important traditions for students and the medical community.

Emma continued her role as a producer for the MedPlay 2022, Written Rule of Law, which will be filmed for an online broadcast later in March 2022, with tickets available soon. Meanwhile, Shadan became a co-producer of the Spring Gala 2022, which is currently planned to be held in person on April 23rd at the Chan Centre for Performing Arts. Dr. Duan and Dr. Edeer have since graduated and act as advisors for the current Spring Gala team.

“We are incredibly excited to continue these beloved UBC events this year, celebrating the wonderful and varied talents within our medical student community,” Emma and Shadan say. “Thank you to everyone who has helped keep these traditions alive.”

Save the date! The 28th Annual UBC Medicine Spring Gala will be held at the Chan Centre for Performing Arts on April 23rd, 2022 at 7pm. In-person and live streaming tickets will be available through the Chan Centre for Performing Arts website and Trellis in late March 2022. For current information regarding the event, visit the Spring Gala website.