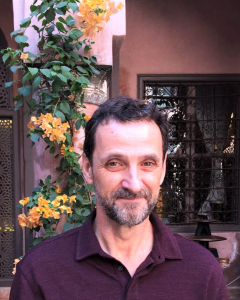 Dr. David Meddings, MHSc’94, MedRes’97, has worked at the World Health Organization since 2002 and is currently in the Department for Management of Noncommunicable Diseases, Disability, Violence and Injury Prevention.

Describe what you do, in a few sentences.
I work at the Headquarters of the World Health Organization in Geneva, Switzerland. I work in the area of violence and injury prevention and have moved from armed violence prevention to prevention of unintentional injuries.

What do you consider your greatest achievement to date?
Getting my wife to marry me. We met in 1990 while we were both working for the International Committee of the Red Cross (ICRC). We were part of a small team based in Jaffna, Sri Lanka during the civil war there. She is so much more interesting than I am….I can’t fathom why she decided to marry me. We married between missions in 1991 and two fantastic children and almost 30 years later, I’m still at her side – that’s hands down my greatest achievement.

Please list a few of your current accolades/awards received, volunteer positions, and/or past job positions.
After medical school, I ended up coordinating medical actions in different conflict settings. Those included places like Sudan, Sri Lanka, Cambodia, and Afghanistan. That work led to my interest in studying public health, which brought me to UBC for a 4-year fellowship. After my specialty training, I returned to humanitarian work – initially as the Chief Epidemiologist for the ICRC at their Headquarters in Geneva and later to the Headquarters of the World Health Organization (WHO) where I’ve worked since 2002.

Name the last book you couldn’t put down.
The Garden of Evening Mists by Tan Twan Eng. A retired Malaysian Supreme Court judge faced with failing memory and speech attempts to remember her life before her mind obliterates. The novel follows her as she composes her memoirs, covering the Japanese occupation of Malaya, her internment by the Japanese and her eventual post-war love affair with a mysterious Japanese gardener who was once the gardener for Japan’s Emperor Hirohito. I loved how it was so evocatively written, as well as the richness of the glimpses it provided into Japanese and Malaysian cultures.

What is the best professional advice you’ve received?
It’s not so much advice I’ve received but an observation I have made of people I have respected. I have had the privilege of working with some absolutely world-class people during my career. One thing I have taken away from the best of those colleagues is that they consistently treat younger colleagues with respect and encouragement. I’ve done my best throughout my career to always give as much time as I can to younger people and through doing that I have benefitted enormously from their energy and enthusiasm, their intelligence, and their friendship. It’s kept me young and engaged with what I do.

What is your favourite UBC memory?
My wife and I had a townhouse in North Vancouver and I used to cycle over to UBC every day. It wasn’t very practical in some senses, but I loved those rides – coming into the Endowment Lands during warm fall days was spectacular. Anyone at UBC should never take for granted just how beautiful the location is and take full advantage – every time I come back to see my daughters (both at UBC), I visit Nitobe Memorial Garden.

Biggest risk you’ve taken to date?
I’ve experienced some danger and very fearful moments while working in conflict settings. Anyone contemplating that work should really give serious thought to the security aspects. It’s one thing to think about it in the abstract, it’s quite another to live day to day with security being one of your foremost considerations. I’ve had my own close calls, I’ve had people I love have close calls, and I’ve had friends and colleagues killed, including one who was tortured and killed.

What is your next challenge/goal?
I can see retirement slowly approaching – I’ll turn 65 in 7 years. I want to make that transition a good and healthy one. For me, I want that to involve some level of ongoing work – I have been full-on in my career and I just can’t see going to zero. But I also want to keep up with the hobbies and things I’ve picked up along the way – my wife and I do yoga together and I want to keep that up, and expand on the time we spend together. Working out how to see more of our children is always a challenge as we are in Switzerland and they are in Canada. And of course that challenge will evolve, as 7 years from now, both our daughters will live very different lives as well. For me, the challenge is recognizing and embracing the fact that one never remains the same person across the chapters of one’s life and one constantly has to think about how one needs to change.

What led you to choose your area of study for your MD?
I wrote a speech on the eradication of smallpox for a competition in high school. I ended up winning, which meant I travelled to the United Nations Headquarters in New York on a Greyhound bus over 3 weeks in 1977 with other speech winners from the United States and Canada. That experience led to my deciding on medicine at the age of 16 and from the outset, my goal with medicine was to work overseas. Ironically, my speech was informed by an article I’d read by Dr. Donald Henderson – I corresponded with him briefly after going to the UN, and then I was introduced to him many years later at the WHO.

Did you almost study something else – or pursue a different path?
Nope. But if I had to remake my career today, I would focus on climate change. We need strong direction on that, followed by a wide range of evidence-based actions.

What advice would you give to current Faculty of Medicine students?
Four things:

Please name a few of your favourite hobbies and activities.
I enjoy woodworking – particularly with hand tools. That’s led me to discovering Japanese hand tools, which in turn has spilled over to respect for Japanese kitchen knives. Among my other passions a big one is for coffee – I roast my own beans and love the whole process of espresso.

Name something that is on your bucket list. Have you completed it?
To be honest, I don’t really like the idea of bucket lists. People’s interpretation generally seems to be something grandiose and often out of character. My only fundamental ambition is to be able to leave this life and reflect back on how I’ve lived it and feel happy. I want to go away knowing my daughters no longer need me and that I’ve been the best partner I can be to my wife.

What are the best aspects of your career?
I feel very privileged to be able to work with great people from all around the world. And I love the fact that I am constantly learning new things.

What are the most challenging aspects of your career?
Challenges have changed over my career. In 1989, I started my first mission in what is now called South Sudan. I was the only doctor for a huge region with immense health problems. People would sometimes walk 3 or more days to see me, and I was facing children dying on at least a weekly basis – something I had never seen in Canada. I acquired malaria there as well and ultimately lost two-thirds of my blood volume. Luckily, I had just decided I needed to have myself evacuated and my last crisis took place in hospital.

At the moment, I would say my main challenge is that I travel a lot. That brings its own stimulation, but being able to perform at a high level and tempo across time zones can be very demanding.

What is one question you’re often asked about your career?
Mostly it seems younger people ask me how I got to my job. In my case, it started with a very general idea – becoming a doctor and using that training overseas. I had no idea that work would mean being a doctor in conflict settings, nor that my work in those settings would lead to an interest in the dynamics of violence in settings with a lot of weapons about. But it did, and that led to other doors I wanted to open. So I suppose I got to where I am by making a few fateful decisions along the way, but always being willing to open the door in front of me.